Well done to our 6th grade White senior team who were runners up in their grand final match against the Workers on 27 August 2011. 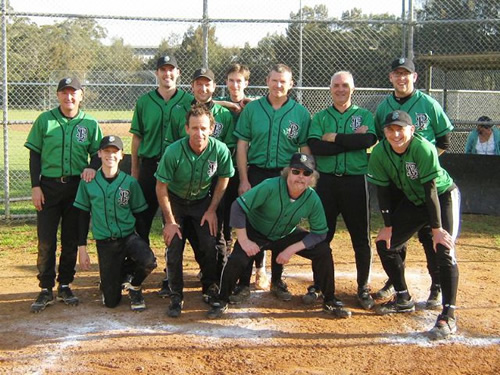 General consistency throughout the season kept the Whites at the top of the table and always within striking distance of the minor premiership. At the last round, the Whites finished in 3rd position behind the Rovers, had the 2nd best For/Against record in the grade and was the only team to defeat the Minor Premiers, the Workers in the regular season.

The Grand Final was tense and dramatic. With our guys pulling away 10-0 after 3 innings it was looking very promising but baseball can be a cruel game and the 4th innings saw the Workers pile on the runs and score 12 in one dig. The game remained on a knife's edge through to the 7th innings where the Workers finally prevailed 19-18. Although dissappointed, the guys were proud of their efforts and happy to take home their glass drinking trophies at the end of the day.

The White team regularly drew on other St Pats players to fill the voids during the season and a special mention should go to Craig Connors (6th Grade Green) who willingly sat on the bench during the finals always ready to take the field if needed.