Charged with delivering the ball to the plate in a manner difficult for a batter to hit. Good throwing speed is good indication of a pitcher, but accuracy is more important. They should be tough, smart, and retain their composure when faced with a challenging situation. Will be required to ‘cover’ home plate on a short pop fly or foul when there are runners on third.

Generally the team leader while on the field since they are the only player facing all the other players. The catcher will: track the count on the batter; track the number of outs; remind fielders of their position on the field; back up 1st base on every infield play; and generally spend most of the time getting up and down from the squat position. Makes my calves hurt just thinking about it! This player should be your most rugged and quickest thinking individual.

Infield players must be able to react quickly toward a hit ball, and have good hand-eye coordination skills. For shortstop and third, a good throwing arm is also needed. These positions will be easiest for right-handed players, since they do not have to turn as far to throw the ball to first.

The perfect place for a ‘lefty’ who can catch the ball well. Balls will be bouncing in, flying in, on target and off target, so their primary responsibility will be to catch and/or stop the ball. Strength and size are also strong determining factors. Strong concentration skills will also be a necessity, as they will potentially be involved in every play.

Size and stature are of little importance. Speed, quickness and good fielding will be the determining factors. Must be able to ‘think-ahead’ when there are base runners, ie. "If the ball is hit to me, I will touch second base, or tag the runner, and then throw to first".

This player should have excellent forward and lateral speed, as most balls hit at them will be short, and/or to the players' left. They should be able to throw the ball on a dead-run and be able to field the ball barehanded. They are the furthest from first, so a strong throwing arm is required.

This player has more ground to cover than any other player does and must be fast, quick, agile and have a strong throwing arm. The shortstop will potentially field more ground balls, in more off-balance positions, than any other player. Being able to ‘think-ahead’ is required for this position as well. This position will back up the second baseman on any throws to second.

Outfielders must cover large distances, so speed and quickness to react (‘gut instincts’) to the ball is key. They must be able to catch fly balls above their head and on the run. They must be able to throw the ball a long distance and accurately to be effective. Younger players’ may find it difficult to concentrate on the game, since they are so far from the action. Emphasizing the ‘ready’ position will give outfield players something to concentrate on at each pitch.

Of all outfield positions, this player should have the weakest arm, as they do not generally throw the ball as far. They still require good fielding and catching skills and backup third on pick-off attempts from the catcher or pitcher.

This will be the player that has the best combination of speed and throwing distance. Like shortstop, they cover more ‘grass’ than any other player and, most likely, will catch the most fly balls. They must backup second on all bunts and throws from the catcher.

As well as the requirements above should be a good ‘think-ahead’ player. This player backs up first base on all throws from the catcher and all bunted balls, since the catcher must be available for fielding the ball. They backup second on any ball thrown from the left of the diamond (ie. shortstop, third base or foul territory). 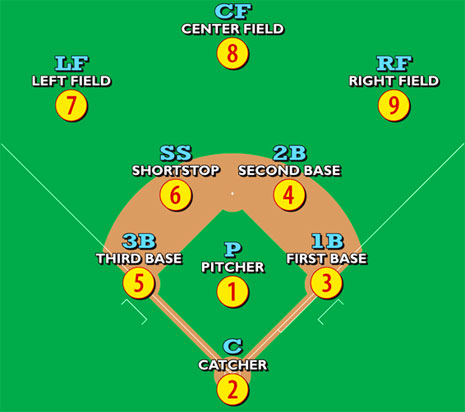