A chance meeting of former associates early in 1994 was the catalyst for the formation of the Ballarat Golddiggers, a unique entity with a remarkable record of involvement in Masters baseball.

These two ageing baseball dreamers had read of the impending World Masters Games to be held in Brisbane. Over a number of ales, they spoke of reactivating their own playing involvement and approaching former teammates to invite them to form a 40 and over team for Brisbane 1994.
While the cynics were baying, the response was generally enthusiastic from the former National League stars and Australian representatives, club stalwarts and social players who were approached. Some were still playing, others had just recently retired from the sport, others hadn’t swung a bat for years. Others had never swung a bat very well in any case. But the project seemed a goer.
A Club structure was established, a Constitution was written, quaint old-looking uniforms were ordered (for old-looking players), training commenced and a strategy was put in place. Part of that strategy was to enter the team in a mainstream winter competition – Geelong - as preparation for the World Masters Games.
Not knowing quite what to expect, the Diggers warmed up prior to their first match to a backdrop of derision from a youthful opposition whose baseball experience was surely miniscule by comparison.
“Old Friggers!” they chortled. “Should be called Gravediggers….ho ho ho!” Such droll humour.
The Diggers scored ten in the first. Clearly losing the plot, three opposition players were thrown in the second. Three Digger runs in the third…..then two….then three…..another couple. The game was mercifully called after seven with the Diggers in front 23-5. Not a bad start by any measure.
Over coming months the team’s performance tended to be inconsistent, as “new” old  players joined and a large squad was rotated in the spirit of inclusiveness and fairness required by Constitution. Still, the Diggers won enough games to stay in touch with league leaders – eventually finishing third coming to the play-offs.
Although disappointing in an early finals game, the Diggers rebounded strongly to qualify for a Grand Final berth – then to crush their opposition when it counted most.
This was the first of a sequence of mainstream winter successes that the Diggers enjoyed. However, it was never the “main game” and their sights were well set on the 1994 World Masters.
A bronze medal in the World Masters was a creditable performance against tough opposition – and a fitting note upon which many could easily have been expected to leave the game. Again. Not so, however. After coming this far and each personally achieving a great deal, there was much much more on offer - including regular appearances, since, at all major Masters events throughout the land.
The Golddiggers were a finalist in the Victorian Sports Awards in 1998.
Over two decades, there has understandably a been a significant turnover in personnel as players have retired or have left the game for other reasons, while others have come into the squad in the lower age group. The Diggers estimate that between 150 and 180 mature-aged baseballers have played with them at some time or other since 1994. The overwhelming majority of these would have been lost to the game were it not for the phenomenon of Masters.
These days, the Golddiggers are directly affiliated with the Essendon Baseball Club, playing under the Essendon "Diggers" banner.
There have been various other aspects to the Golddiggers’ involvement in community baseball:
In 1995 and 1996 they coached and fielded junior teams in local competitions. Numerous former juniors have progressed to higher levels in the sport.
Between 1995 and 1997 (when the club merged with the Ballarat City Brewers Club), they fielded a second senior side that included many young players mentored by older teammates.
In 2001 the Golddiggers established the “KIT” (Kids in Teams) Fund to assist less advantaged young people to become involved in team sport. This project was actively supported for several years by teams playing at the Victorian Masters Baseball Carnival.
The Golddiggers were instrumental in the creation of a Ballarat Masters Games (later State Autumn Masters and Victorian Masters).
They initiated and they continue to manage the highly successful, annual Victorian Masters  Baseball Carnival from 1997 through to 2013.
Ground conditions and water restriction necessitated a relocation of the Carnival to the magnificent Geelong Baseball Centre, where it was held for seven years. During that time, the Carnival was overseen and delivered by the Geelong Baseball Association and the Guild, Saints and Baycats clubs, with some input from founding Carnival members as required. The Carnival returned to its Ballarat "home" in 2011.
Starting with four teams in 1997 - Fitzroy, Geelong, Latrobe Valley and Golddiggers - the Carnival has enjoyed ongoing expansion and popularity, with thirteen teams suiting up for each of the past two series of the event being held in Geelong. Sixteen teams entered in Ballarat for 2011, twenty in both 2012 and 2013 before expanding to an absolute maximum of twenty-six in 2019.
The personal benefits of continued active involvement in team sport are well-documented. Aside from that – and apart from the enjoyment and social engagement of Masters baseball – it is fair to say, without Masters, that many more older players would have been lost to the game forever. Instead, what we and other clubs and associations are now seeing is that so many Masters players are returning to administrative and coaching roles, with great benefits for baseball at grass roots level.
The Geelong Baseball Association is one of the organisations that has grasped the significance and huge potential of Masters baseball. It - like Baseball Victoria - continues to support and promote the activity. Clubs and associations around the state have embraced Masters baseball, with over thirty clubs involved in its Baseball Victoria summer competition - which concludes shortly before the Carnival is held.
In 2011, the Victorian Masters Baseball Carnival returned to its Ballarat "home" - at Prince of Wales Reserve. Successful delivery of the series is now largely assured through the involvement of the Ballarat City Brewers Baseball Club - which provided wonderful support as the host club before merging as "Ballarat Royals" with the equally supportive Mounties Baseball Club. 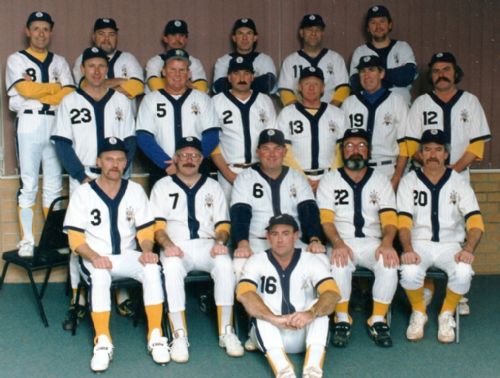