Played throughout in the characteristically positive and fun-filled spirit of the event, the nineteenth Victorian Masters Baseball Carnival was wrapped up in picture-perfect conditions at Prince of Wales Reserve this afternoon.

Three days of jam-packed action concluded with finals in each of the age groups.

In 45 Plus Division One, it was Big Cat Tomatoes who delivered the goods with a strong 9-4 result over Coburg – another perennial finalist – while Tassy Tigers (team image to come) excited their band of engaged supporters with a thumping 12-1 result over a Tomatoes second side playing in its first 45 Plus Division Two series in this group. For the Tassy boys, too, it was their first finals appearance – and one that delivered their first title in nine years of travelling across for the series. 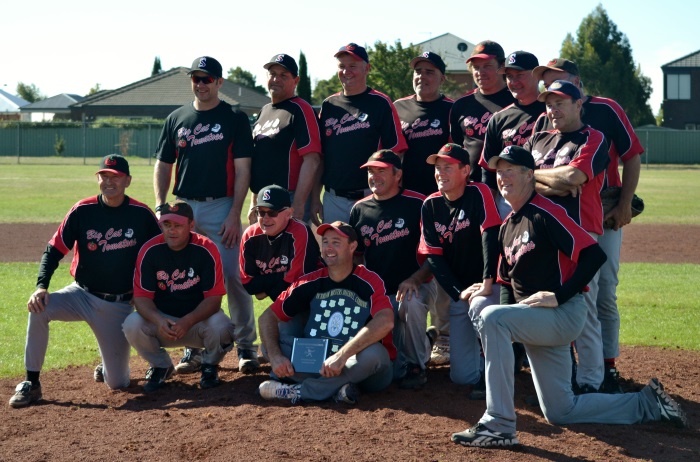 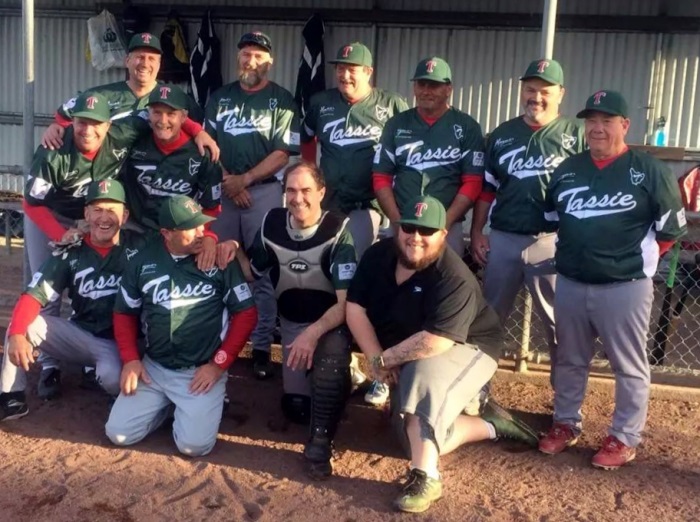 With finals contenders not decided until the early Sunday afternoon round, the 35 Plus Division saw two quality outfits in Pandas and Big Cat Tomatoes pitted against each other. Gaining an early break behind some stellar pitching, however, Pandas were never threatened on their way to a 14-2 mercy rule outcome that reinforced their status as a Masters powerhouse both at this series and elsewhere. 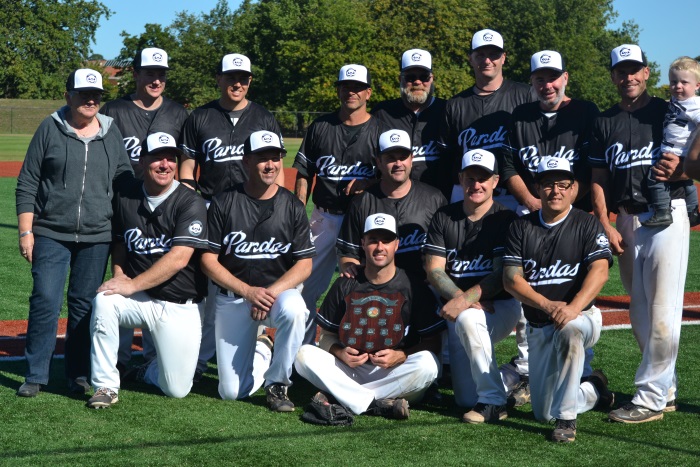 While we congratulate the winners and we acknowledge the efforts of all teams making it to the playoff stage, we pay homage to all of our participants – and all of our twenty-one teams – for making this series another outstanding success.

Masters sport can be a seriously uplifting activity, which largely explains and defines the popularity of this particular unique event. Once again, all teams, officials and supporters embraced the spirit of participation, healthy competitiveness, social engagement and fun that underpin the Carnival.

To the new team entries, and to all of our new players, we again say welcome. To all we extend our congratulations and our appreciation for the manner in which you honoured and further strengthened those Carnival principles.

We extend our thanks to the Ballarat City Brewers, Mounties and Alfredton clubs for having their grounds in terrific condition for the event, and for maintaining the fields over the course of the weekend. Our fourth ground - the Field of Nightmares – was a significant improvement on previous years, complete with portable mound generously loaned by Werribee Baseball Club.

We thank the City of Ballarat for its continued support of the Carnival and we hope that council will see fit to further improve and develop the overflow field in view of the increased number of teams which next year will be capped at an absolute maximum of twenty-four.

While the support of all three clubs is very much appreciated, we particularly acknowledge the herculean effort of host club Ballarat City Brewers, which did another fantastic job in efficiently and good-naturedly meeting the demands created by a large group of visitors.

We thank Umpires’ Coordinator Bruce Suttor and his group of adjudicators and we trust that scorers, drivers and others providing assistance to teams will be extended the credit and the recognition that they richly deserve.

While dates for the 2016 Carnival have not yet been set, there appear to be two choices available to us – 18-20 March (likely to be the week after Baseball Victoria finals) or 1-3 April (middle weekend of School Holidays). A decision will be made in the near future, after both options have been assessed.

See our GALLERY for a collection of images from the weekend. Teams are encouraged to use our images in promotional and other reasonable manners as they see fit.

It was a magnificent occasion for baseball at Prince of Wales Reserve today, as teams from all three divisions jockeyed for potential play-off berths leading into the Sunday finale.

Despite dropping a game to Golddiggers, Coburg has already qualified for the 45 Plus Division One final and is likely to meet Big Cat Tomatoes, although the Pandas could engineer an upset of sorts if they can inflict a thumping win on the Tomatoes, while the Diggers are destined for a fourth versus fifth shootout with Sandringham.

45 Plus Division Two is at a fascinating stage, with Tassy Tigers, Bendigo and Big Cat Tomatoes locked at two wins and a loss each heading into the final preliminary round on Sunday morning, while Fitzroy, Newport and the Bees have all notched a win and will be keen to finish on a high note.

With all teams producing high quality baseball in this division, the 35 Plus finalists are still to be decided. Bees and Pandas are both undefeated after three games in their group and will meet tomorrow to determine who will head their pool and thereby qualify to meet either Big Cat Tomatoes or Sloths, who will also meet in a deciding preliminary game.

While the three other teams in each group cannot make the 35 final, we can be sure that they will be primed to finish the series in a memorable fashion.

The action resumes at Prince of Wales Reserve on Sunday, starting at 8.30 AM.

Scroll down for a selection of images from Saturday games. 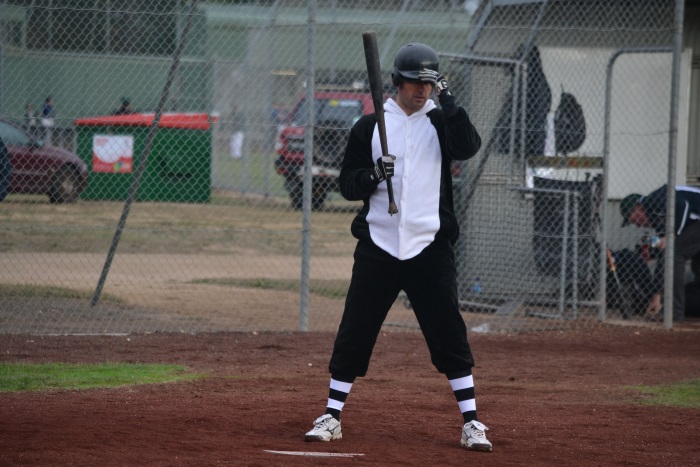 With the weather marginally on the improve in the afternoon, a full book of Friday games produced an interesting  spread of results across the three divisions as the nineteenth Victorian Masters continued at Prince of Wales Reserve today.

Coburg and Big Cat Tomatoes went two from two in 45 Plus Division One, while the Pandas split their two games and reigning titleholders Golddiggers and newly promoted Sandringham are yet to open their account. With a win in their only Friday games, Bendigo and Newport sit atop the Division Two table ahead of Fitzroy (one and one), Big Cat Tomatoes (one and one) and the thus far winless Tassy Tigers and Bees outfits.

The 35 Plus group has already produced some scintillating baseball, highlighted by two strong wins to Big Cat Tomatoes, an imperious showing by the Pandas, a one-run Bees thriller over Ballarat and a share of the spoils that saw Cods, Sloths, Red Sox and Doncaster each post an early victory.

With fine, sunny conditions in prospect for the weekend, the series is bound to hot up – in both the literal and figurative sense – as our ageing warriors test their bodies, their willpower, their stamina, their reputations and almost assuredly their wallets as they continue to lock horns onfield and in after-hours frivolity.

Scroll down for a few images from the Friday action. More to come shortly. And, yes, bribes are accepted for photoshopping or for non-publication. 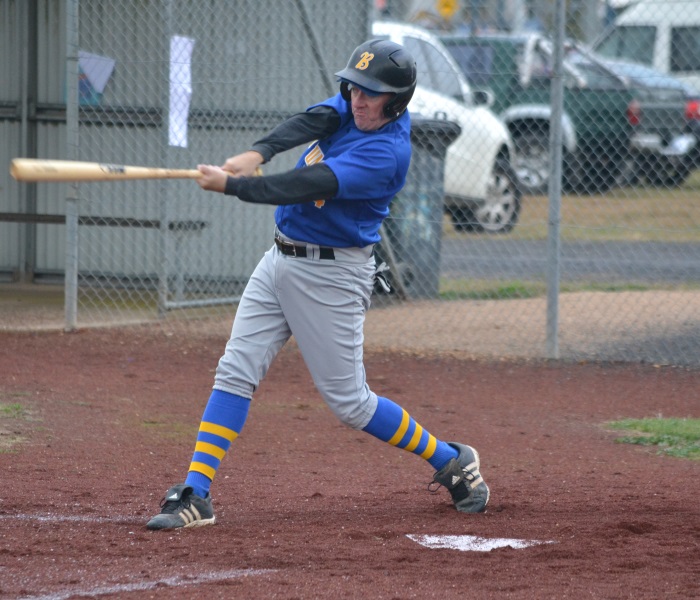 The Victorian Masters has for nineteen years set the trends and the standards for mature-aged sport. This time around it was a more dubious opening than we might have expected.

For this first time in its illustrious history, the Carnival was affected by weather to the extent that the Thursday night game between Ballarat and Tassie Tigers in 35 Plus had to be abandoned after 35 minutes or so – with the score at 2-2.

Teams have agreed to reschedule the contest for 2.30 PM on Saturday.

With conditions predicted to improve significantly through Friday and over the weekend, we are poised for another fantastic weekend of Masters baseball at Prince of Wales Reserve. 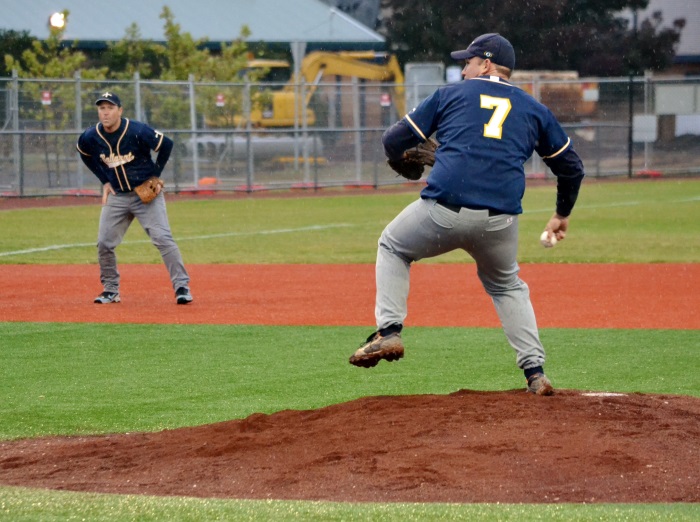 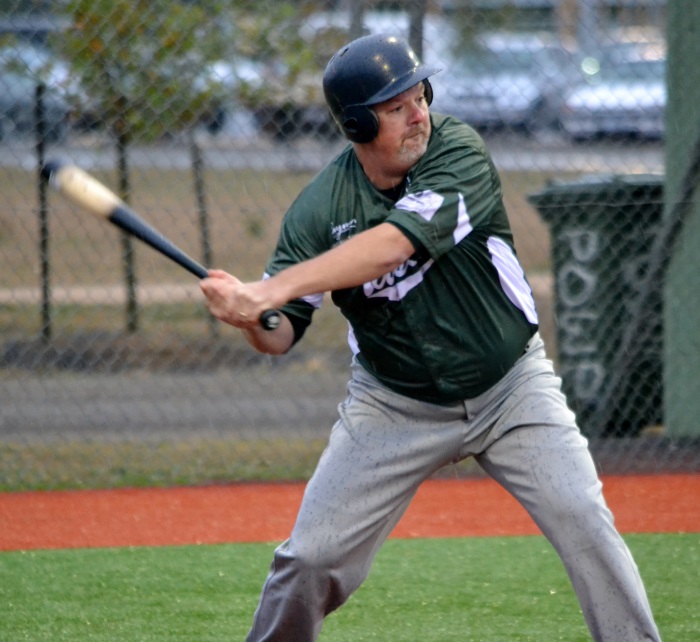 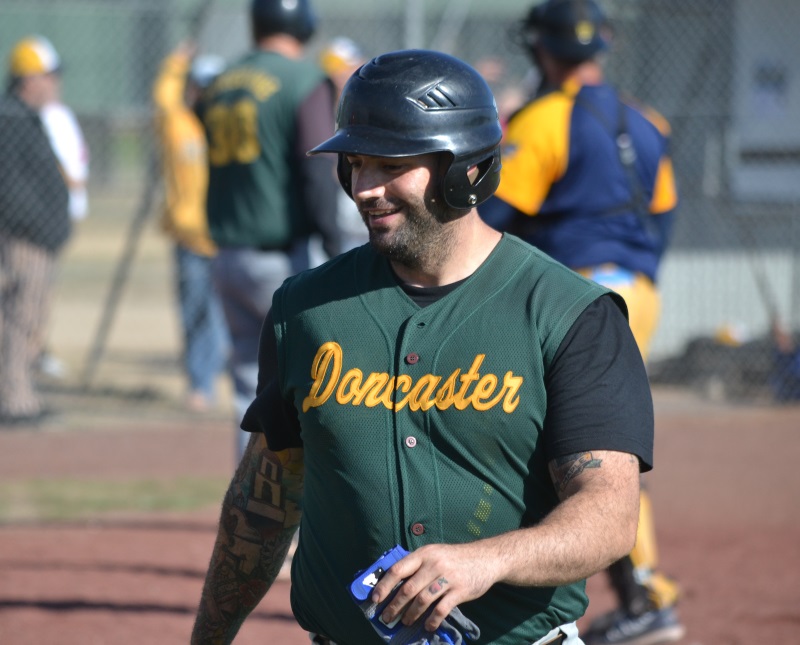