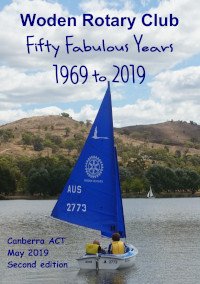 Fifty Fabulous Years is a booklet (A5 page size in PDF) celebrating the Club's fifty years from its beginning in May 1969, produced in May 2019 when the Club became 50 years old. The Second Edition contains some corrections from the original edition.

Five Years to Forty-FiveÂ is a booklet (in PDF) summerising the Club's activities from June 2010 to June 2014 (when the Club became 45 years old), produced in August 2014.

Fit and Forty is a bookelt summarising the Club's activities from 1969 to 2009, produced in May 2009, when the Club turned forty.

35 of the Best is a booklet summarising the Club's activities from 1969 to 2004, written to celebrate the 35th Anniversary of the Club.

25th Anniversary Report - celebrating twenty-five years of service (1969 to 1994) with details of the highlights of each year.

President's annual reports since 2019
Earlier reports are in the Fifty Fabulous Years booklet: